Enter an alternate medieval Japan, one where Shinto has been outlawed and the gods lay slumbering across the land. One day, a peasant girl stumbles across the Lord Daimyo’s son dying of an arrow wound in the forest. Their meeting will change the course of their lives, expose dangerous secrets, and influence the politics of Yamato all the way to Kyoto and the Emperor’s court.

But Lily was born in the year of the Tiger, and can’t ever be like other village girls. In the woods snaring rabbits one day, she finds instead the Daimyo’s son, Ashikaga, wounded, in the gooseberry brush. When the Pretender Emperor’s men arrive to kill Ashikaga, Lily, desperate, sings a forbidden Jindo song.

The song wakes a powerful spirit – as well as Ashikaga’s interest. The prickly lord has hidden secrets of his own and a burning desire to prove himself to his father. He will stop at nothing to defeat his father’s greatest enemy.

All Lily wants to do is take care of her sisters. But the Pretender-Emperor’s forces are drawing near, and now the Daimyo’s son knows she communes with Jindo gods. She wants to trust Ashikaga when he swears he will not tell her secret, but he is a noble – and Lily only a peasant. Lily’s heart is leading her down a dangerous path. She may have to defy her father, Ashikaga, and even the spirits themselves in order to defeat the Pretender-Emperor’s magic and keep safe all that she loves. 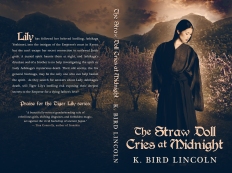 Lily has followed her beloved lordling, Ashikaga Yoshinori, into the intrigue of the Emperor’s court in Kyoto, but she can’t escape her secret connection to outlawed Jindo gods. A cursed spirit haunts them at night, and Ashikaga’s drunken sod of a brother is no help investigating the spirit or Lady Ashikaga’s mysterious death. Their old enemy, the fox general Norinaga, may be the only one who can help banish the spirit As they search for answers about Lady Ashikaga’s death, will Tiger Lily’s lordling risk exposing their deepest secrets to the Emperor for a dying father’s love?

In this short story set before the events of Tiger Lily and The Straw Doll Cries at Midnight, Lily draws on all her wits to save the only remaining parent she has. When the Lord Daimyo’s son is poisoned, Lily must prove her father is innocent of the crime. Can a lonely girl born in the Year of the Tiger save her family without revealing a forbidden connection to the old gods?

In this short story set after the events of novels Tiger Lily and The Straw Doll Cries at Midnight, Tiger Lily and her lordling, Ashikaga Yoshinori travel to Dejima Island, the home of foreign doctor, desperate for a cure for Ashikaga’s father, the Lord Daimyo’s, mysterious illness. But someone else has gotten to the doctor first and Ashikaga will face the choice of saving the Daimyo. or exposing a long-held secret.